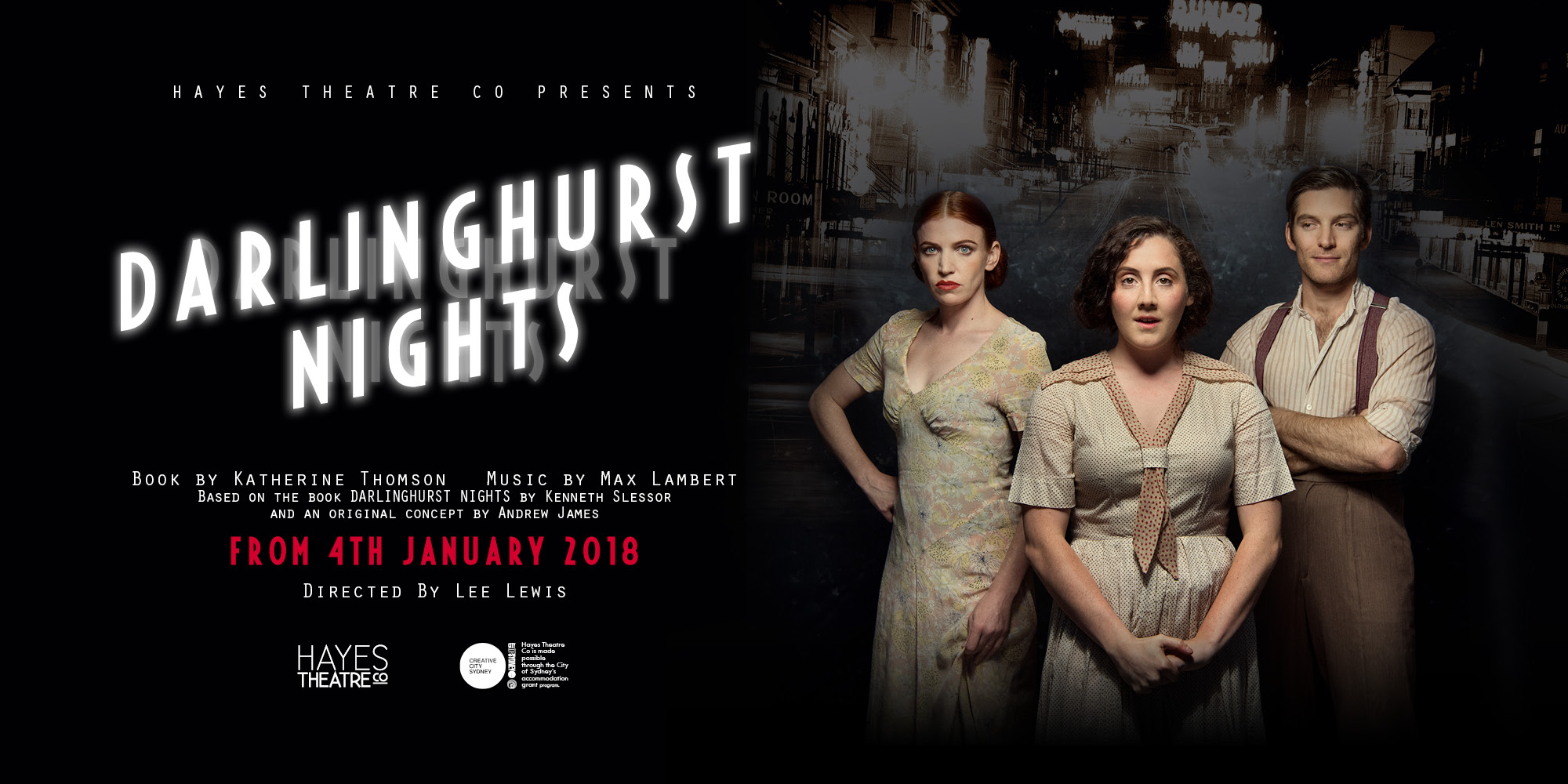 Book by Katherine Thomson, Music by Max Lambert, Based on the book DARLINGHURST NIGHTS by Kenneth Slessor and an original concept by Andrew James

Recommended for 12 years and over. Contains strong language and some adult references, including violence and drug use.

This classic Australian musical takes place on the streets around Hayes Theatre Co itself, and the Hayes celebrates the show’s 30th anniversary with a new production from Helpmann Award-winning director Lee Lewis (The Bleeding Tree).

Darlinghurst Nights explores the seductiveness of a life authentically lived, of a world where people can live without fear of intolerance amidst Sydney’s most colourful strip. Set during the 1920s and 30s, and inspired by Sydney poet Kenneth Slessor, writer Katherine Thomson (Diving For Pearls) and composer Max Lambert (Miracle City) capture a time when Kings Cross was the only place in Sydney where a person could live anonymously; where bohemian lifestyles were accepted and even encouraged.

The show was first produced by the Sydney Theatre Company in 1988 where it was a phenomenal success, and was revived in 2000 for the Olympic Arts Festival at Sydney Opera House.

At another moment of existential upheaval for Kings Cross, Darlinghurst Nights take us back 80 years to a world we recognise, but are in danger of losing.

Content warning: This production contains theatrical haze, depictions of drug use, mild violence and adult themes including suicide. If you have any concerns please contact us.

Thomson weaves these strands together with a gossamer touch as the writing flows silkily between expressive, poetic language and blunt everyday lingo. Wonderful songs emerge from Lambert’s delicate underscoring to heighten emotion, make a satirical point or reveal character, everything amplified by John O’Connell’s delicious choreography.

Darlinghurst Nights is an intimate memory piece that’s sad, funny, vital, melancholy, high-flown and down-to-earth. Miraculously, it is exquisitely judged in every respect — just about as perfect as could be.

The performances are spot on across the board. Justin Smith captures just the right mix of robust, easy, larrikin charm and dark emotional undertow as Joe and the friendship between him and Sean O’Shea’s more dapper, restrained Ken is utterly believable. Baylie Carson sparkles as the wide-eyed, naive but spirited Mabel, Andrew Cutcliffe exudes thorough decency as the kind-hearted, handsome Frank who falls for Mabel yet still yearns for the country, Billie Rose Prichard is a rough diamond as Cora who longs for a better life, Abe Mitchell has the necessary grunt and sense of danger about him as the hot-tempered, bullying Spud, while Gamsu brilliantly conveys the pain beneath Rose’s elegant, haughty façade and when she falls apart it is heartbreaking.

Darlinghurst Nights is a small, intimate show about a Sydney now all but gone. Nostalgia and a sense of what has been lost are part of its touching charm, while the cast and creative team bring it to vivid, heartfelt life. A true delight.

The actors have been gifted with vivid, three-dimensional characters and the casting of each is spot-on – they are superb.

Director Lee Lewis has been faced with the formidable task of working with the show’s originators as well as her first musical and she’s crafted a poignant, slyly humorous and beautifully performed piece. It’s a show at once intelligent, understated and rich with the unexpected maturity of Thomson and Lambert’s early work. Deeply and satisfyingly Australian theatre. Loved it.

Director Lee Lewis has a top-notch ensemble to work with, musically and dramatically. She brings together Thomson’s lyrical, impressionistic text, Lambert’s lively score and John O’Connell’s choreography into a satisfying whole.

This is an engaging, thoughtful production.

Lee Lewis is a natural fit for director; her inquisitive eye pushes her ensemble to dig deep into each character, so alive they seem to walk beside us on the street after the show. For her musical theatre directing debut she handles the delicate relationship between scenes and song with care and assurance.